Brianna Gregory, of Sodus, is with our President, Michael Johnston. Brianna will be attending Palm Beach Atlantic University fall 2007 where she will Major in Musical Theater. Brianna has performed in many local theatre groups including Webster Theatre Guild’s 2007 production of Anything Goes! She has also recently spent a total of 8 months touring with the Continental Singers. While touring she performed in Switzerland, Spain, China, Hong Kong, Malaysia, USA, Canada, and Singapore. After college Brianna would like to make her way to Broadway where she can share her love of performing with the world 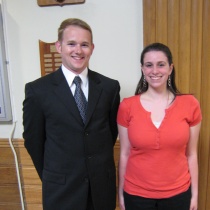 Kayla Mayou, of Sodus, is pictured with our President, Michael Johnston. Kayla will be attending Roberts Wesleyan College in fall 2007 where she will major in music education. Kayla has performed in a number of shows with Sodus HS as well Neighborhood Acting Company. Her most recent Production was You’re a Good Man Charlie Brown with Sodus High School. When not on stage Kayla keeps busy with National Honor Society, church organizations, and she teaches drama and dance at summer recreation programs. 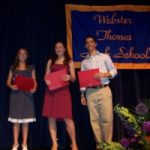